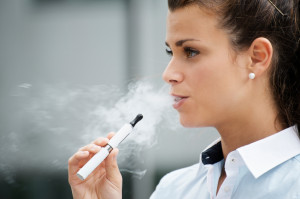 The Centers for Disease Control and Prevention reports that one in five U.S adult smokers have tried electronic cigarettes. Consumers have a wide selection, with over 200 types available, in different strengths and flavors, making them an attractive smoking alternative. They present a dilemma for employees and employers alike for several reasons though, and health and wellness is only one of them, as most e-cigarettes contain harmful substances including nicotine, carcinogens and other toxins.

Five years after the Tobacco Control Act was passed, proposed regulation of e-cigarettes is underway that will give the federal government control over e-cigarettes, cigars, pipe tobacco and other smoking products like nicotine gels. Age limits, health warnings and restrictions on selling in vending machines are expected. More complex regulatory issues, such as flavors attractive to children and television advertising, are on hold pending further scientific study and findings, making HR compliance tricky.

Rulemaking regarding e-cigarettes is a few years out, since product registration, FDA review, and public comment periods all have to take place before final rules are issued. University of Richmond law professor Carl Tobias says it may be years before regulations are in place. Campaign for Tobacco-Free Kids Matthew Myers made a statement condemning the FDA for not acting sooner on e-cigarettes and causing serious public health consequences, especially for children.

Health and safety concerns about e-cigarettes include questions about what is inhaled in the resulting vapors when liquid nicotine is heated and vaporized, doubling of use by teenagers in one year, and increased calls to poison control centers about children and e-cigarettes. With no comprehensive studies of usage patterns and health effects and rapidly increasing use, regulatory action is not keeping pace with expanding product manufacturing and sales.

Employers face a dilemma with e-cigarettes in the workplace because e-cigarettes are not currently classified and HR compliance with regulations isn't a requirement yet. They are not technically cigarettes or classified as something that is smoked. They are odorless unlike traditional cigarettes which create recognizable smoke; they only emit a vapor. There is no proof yet that they are a health risk when used appropriately by adults because they haven’t yet been studied enough. As they are in this classification limbo, employers are also between a rock and a hard place in terms of allowing or prohibiting their use by employees at work.

Employers are leaning on the side of prohibiting e-cigarettes at work since they are not an FDA-approved tobacco cessation device, and can point to several examples of larger groups prohibiting them. Some health systems have nicotine-free hiring policies that include e-cigarette smokers along with other nicotine users as consumers of nicotine, and some health plans ban e-cigarettes in their tobacco-free workplace policies. The U.S. Department of Transportation includes e-cigarettes in the prohibition of smoking in airplanes. The Society for Human Resource Management (SHRM) discusses the American Lung Association’s concern about the FDA’s 2009 study finding toxic chemicals in some e-cigarettes.

SHRM reminds employers that they have discretion about allowing or prohibiting e-cigarettes in the workplace, but recommends making the decision based on business need. Consider employee morale regarding bans on e-cigarettes, avoid limitations based on legally protected status, make clear policies, and give advance notice of pending policies.

However e-cigarettes are handled in your workplace, look at all sides of the issue to make decisions that are fair, legal and are in the best interests of your business and your employees.

Contact PAYDAY to find out about HR Solutions that can assist in complex HR questions.